The desert is not fun but necessary for every believer because it produces humility.  John the Baptist knew this well, and wow, look how humble he was. Whether we want to admit it or not we are all very prideful and at the root of every sin lay pride. Can we humble ourselves? I don’t really believe so. I believe that God is the only one who can humble us and a lot of times He allows desert experiences to do that. I ‘ve been in the desert for well over a year now and to be honest I just kind of gave up, laid out in the sand, and decided I was going to live there forever. The sad reality is God was trying to bring me out of the desert and I refused to let Him. I began rolling around in the sand making sand angels and throwing my “whoa is me” pity party. Great visual I know! Which while I’m on the subject of pity parties that is also a form of pride my friend. So after the 3-month pity party I received a spanking from my loving heavenly father that I totally deserved it and am thankful for. Now that is great parenting people, when you can spank a kid and they appreciate it!  He spoke very specifically to me but the summarized version of what He said was, “get up and move on”. The directness and sternness in which He spoke to me was all I needed to immediately feel peace. It was just like “that’s it, He has spoken His will and it will be done whether I like it or not”. So I gave up the pointless fight. I laugh about the whole situation thinking about it now because I was in such a defiant struggle with God and once He brought it to my attention I actually went online to find an image of what our relationship has looked like for the past 3 months. I found a picture of a mother and child. Obviously the mother is representative of Christ and I’m the child. 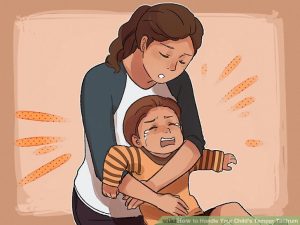 What gets me still is that God wasn’t angry with me. Like most parents after a little while of a child’s tantrum they will loose patience and lash out but God never did. He just kept holding me and talking to me and letting me throw a fit. What a good Father. Now that is what I call a humbling experience. When you realize you have been an absolute brat to a Holy God that loves you more than anyone else and only wants the best for you. I deserved a whole lot more than just a stern talking to but He chose to give me the Grace I didn’t deserve.

I was finally able to get honest with myself and honest with God while attending an online retreat this past weekend for missionary women around the world put on by the ministry, Velvet Ashes. There were 110 countries and over 1,400 women involved I believe. One of the exercises was the story when the disciples were on the boat and the storm arose but Jesus was sleeping. We were told to imagine we were in the story, so I closed my eyes and pictured myself there as the entire story was read to me. When it came to the part after Jesus calmed the storm, He looked me in the eyes and asked, “why are you afraid?”… my angry yell of a response shocked me and then brought me to tears. My answer was, “because I don’t trust you”. I think I was so angry with God because of decisions He had made and things He had allowed to happen that it turned into distrust. That is a scary place to be because you begin to doubt everything! BUT God continues to love and pursue this angry, distrusting, tantrum-throwing brat. Wow! Thank you Lord!

“Now may the God of hope fill you with all joy and peace in believing, that you may abound in hope by the power of the Holy Spirit.” Romans 15:13

This verse starts with “now”. Now. Now that the struggle is over, now that I believe, trust, and have faith again. Now I have hope and joy and peace. Amen! So now you know if you didn’t before that we missionaries are all kinds of messed up just like you. We struggle, we doubt, we lose hope, we lose faith, we fail, and fail, and fail again. But He loves us and we don’t know why, and we don’t understand it, but we are oh so grateful for it!