When we first moved here Matt and I both began to wear many hats but never did I imagine wedding coordinator would have been one of those hats. We had our first wedding in Haiti this past weekend and to say it was interesting would be an understatement. Let me first start by explaining why we are even doing weddings. In Haiti marriage is very uncommon for one main reason….cost. Weddings and funerals are the two biggest, most expensive events here and most people will take out loans and go into debt during these times. Why? Expectations of the community. They are expected to provide a huge amount of drink and food for everyone who comes to the wedding or comes to visit the mourning family. Yes, you heard me right. If you have a loved one die it is your responsibility to provide drink and food for everyone who comes to see you. Not to mention the cost of the actual funeral or wedding. I have also heard if they do not provide what is expected there will be repercussions such as violence and theft.

At Hope Rising Fellowship, we want to teach the real reason for the wedding which is getting into a right relationship with God by entering into a covenant of marriage and withholding from the sin of premarital sex until that has happened. We also love these people and want to provide as special of a day as we can without breaking the bank ourselves. With us Americans putting on the wedding it takes the pressure and expectations of the community off of the couples themselves. We provide borrowed clothes, money for the legal paperwork, simple rings, bouquets, decorations, and cake with punch. Now….the story of the wedding.

Saturday there were two couples that were married at the same time. I was asked to be the “marin” of the wedding. They translate it “god-mother” but I would think of it more as the made of honor or witness. The wedding was scheduled to start at 3pm but in Haiti nothing starts on time and I didn’t even see the brides until 2:40 that day when they came over to get dressed. Let me back up to the day before when we were suppose to decorate but no one showed up and nothing was decorated! I was also told we would go to the beauty shop that morning with the brides and never heard from them or saw them. At this point I was beginning to question whether I misunderstood when asked to be the “marin”. I specifically asked the pastors wife if I had to wear a white dress because that is what the “marins” usually wear and she said “no” so I then concluded that I was not the “marin”. Bad conclusion, but I will get to that later. We got the brides dressed, had to do some sewing on the dresses which I thought had already been done and quickly created an extra veil since we only had one.

Then I was told to get makeup for one of the brides. I brought her what little extra makeup I had here thinking she would put it on herself but no, apparently we had to do that. I asked our intern, Andrea, if she would do it and was so relieved that she agreed. By this time 3pm had long passed and it was pouring down rain so we had to wait for it to pass and by the time it did the vehicle to take the ladies to the church was being used to pick up guests in the community. So we waited some more. I honestly cannot even tell you what time the wedding actually ended up starting. Vehicle gets back, we get the brides to the church, and wait outside in the sun until their turn to walk in. And this is where the fun begins. As I am standing there still thinking I am not the “marin” I ask if I can go inside and sit with Matt to watch the ceremony. The response I received was “no you have to stay here with the bride”. So I just had to flat out ask “Am I the marin?” I am sure you can all guess the answer. I am standing there in a casual knee length church dress with no bouquet and the bridal party has already began their entrance. I yell for Matt, he drives me in the truck to the house, I quickly put on a long white dress, grab a bouquet, get back to the church and am relieved to still see the brides in the same spot. I was a little less relieved when I saw the same couple from the bridal party that had started going down the isle when I left were still in the aisle…dancing…to a really slow song…and there were 14 more people in the bridal party yet to enter the church. Each couple in the bridal party, including flower girls had prepared an entrance dance and they each had an entire song to do it. I immediately look at the brides and other marin and ask…”Do I have to dance?” Again, very relieved to hear “no”. So after lots of sweating, waiting in the sun, and watching what I would describe as “Bill Cosby” style dancing…literally…the brides began to enter.Now, as if the dancing was not strange enough, the brides are walked down the isle by the “parin” or what I would the best man. And the “marin” walks down the isle with the groom! How weird was that!?! Once we finished the awkward walk down the isle there were 8 chairs set out. Four on one side facing another four on the other side. The marins sat behind the bride and the parins sat behind the groom and the bridal party sits facing each other in chairs down the isle. As far as the sermon and vows it was very similar to what we would do in the states. The signing of the marriage certificate is part of the ceremony and that is when the marin and parin sign.Oh, I also forgot to mention that the groom and bride also had a boy and girl walk down the isle in front of them and they sat in their laps the entire ceremony. These were not their children either.

Envision Haitian paparazzi all around. Whoever wanted and whenever they wanted could get up and take pictures. I don’t mean just stand up by their seats either, I mean walk up in the middle of everything and stick your phone or camera in the bride and grooms face. At one point there had to have been 12 people up there with cameras in their faces. Something else that surprised me was that the guests were talking during the entire service and at one point half the bridal party just got up and walked outside to talk! Now, I found all of this extremely disrespectful but not one person there looked like any of it bothered them. At the end of the service before cake was served the “parin” of each groom would give a speech…and by speech I mean book. By the time the first “parin” finished the pastor got up and said there was no time for the other speech. We served cupcakes and punch so we did not have to have forks or plates. Pastor called up the family and bridal party first and then the rest of the guests. Chaos is the only word to describe the passing out of refreshments. We did finally get through and everyone seemed to have gotten one. At this point is when the guests began to rip off all the decorations and take them home! Poor Andrea tried her hardest to chase people down and get them back but in the end it just wasn’t worth it. My favorite part of the wedding by far was when pastor Julbenson had the couple kneel and face each other and prayed a blessing over the couples and their marriage.

It was our first wedding, we learned a lot, and I pray with each one the smoother it will get. If you would like to become a wedding sponsor for our next wedding in February you can donate at www.hrch.org/donate-now/ and designate your donation to “church”. 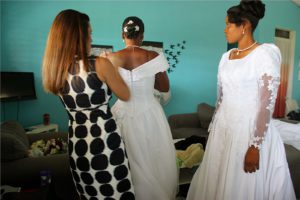 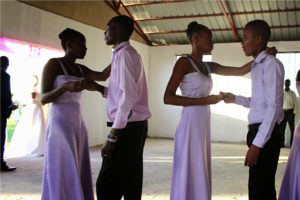 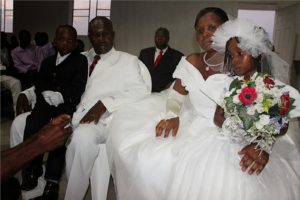