When Matt and I first started talking about taking the kids to visit there was some disagreement as to whether it was a good idea for them to go. One of us felt it would make the idea of moving easier and the other felt like it might do more harm than good. One of us even had a devotional that said “take your daughter to visit an orphanage in Haiti if possible”. I know…Wow! God is so clear sometimes. Then Matt came home from work one day and said we are going to Haiti in September and taking the kids. So we began to talk it up and try to get the kids excited about the trip. That didn’t work so we just stopped talking about it altogether for awhile. We planned for a shorter trip allowing us to not spend so much time in the orphanage that they would be overwhelmed. We had also talked to our contact in Haiti about taking us somewhere in Haiti that would be a little nicer and more relaxing to show the kids it isn’t all impoverished and horrible. As far as accomodations and food went, they loved their beds with mosquito nets and thought they were camping. Kaylea said “our cabin is so nice”. Their favorite food by far was goat! I had to limit them from eating too much so everyone else could get some. Food was a huge concern of mine because Dean has to be one of the most picky eaters I have ever met. I even packed food for him on this trip because I did not think he would eat anything. Obviously, God had already given him a love for Haitian food and I guess I should have been fixing goat and plantains his whole life 🙂

I imagined it would be harder on Kaylea than it was Dean, but boy was I wrong. For the first few days Dean was just not his normal self. He withdrew and didn’t talk much. After the second day he finally started to open up and express the fact that he didn’t think we belonged there because we have money and they don’t. He wanted to know why we can’t just give them money instead of moving there. As best as I could, I tried to explain to him that just giving money actually ends up hurting them more than helping them and that is not what Jesus did and we need to follow his example. I continue to pray God would reveal to him why we need to go and what Dean’s purpose will be there. He did end up making a few friends before we left and on the last day he told our contact that “Haiti truly is a troubled nation”. I am thankful God allowed him to see that.

Kaylea, on the other hand, remained fairly positive the whole time. The first morning in the orphanage she was overwhelmed by the kids crowding around her and touching her, but she got used to it and even started to enjoy the attention. She made alot of friends and enjoyed most helping take care of some of the younger ones in the orphanage. She is already looking forward to going back and has a list of things she wants to do with them.

The last night at the orphanage was good for many reasons. It was dark so saying goodbye was quick. Some of the kids were already asleep, others didn’t realize we were leaving yet, and you couldn’t see their precious sad faces. Kaylea and Dean got in the van before they had to say bye to any of the kids. By this point Dean was having a meltdown and I was occupied with him, but I could hear some of the kids saying “Kaylea is my friend, Dean is my friend” and that warms my heart. To me, they are more than friends, they are already brothers and sisters 🙂 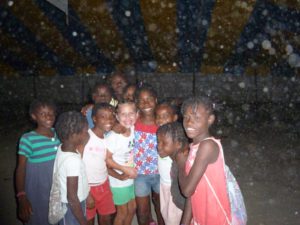 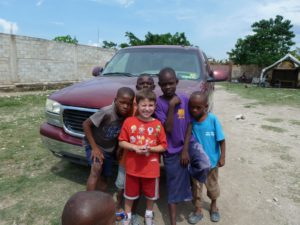